Phenotypic differences between male and females is often less obvious when it comes to facial structure. However, the approach to male aesthetics is different to that of  female. In the initial stages of facial development, all human faces begin as essentially feminine, even if genetically male. Testosterone during the puberty phase gradually transforms face into the male configuration. In 2014, Dr Stephen Marquardt developed the male variant of his Phi Mask, which was developed based on the golden ratio. The male version describes the idealised male face and highlights the slight but significant differences between male and female faces. These differences include:

At Javaani, Dr Ahmad treats the following five areas with the dermal fillers to give an appearance which looks less tires, strong dominant and more masculine. 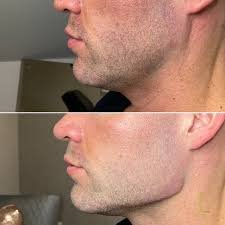 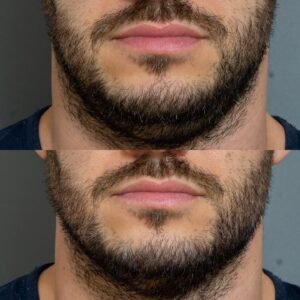 The eye area can be improved by treating the tear trough and supporting the outer part of the eye.

The male jawline is wide and well-defined with a large masseter bulk, giving it a squarer appearance. In this area, dermal filler is injected over the bone to avoid important structures (e.g., parotid gland and ducts). This treatment projects the jaw laterally and strengthen the jawline, resulting in a square jaw which is desirable in a man.

In men, the lateral border of the chin should correlate with a vertical line dropped from the corner of the mouth. In the profile view, a line connecting the most prominent portion of the upper and lower lip should touch the pogonion (Riedel line). The lower lip should be 2-3mm posterior to the upper lip and the pogonion should never project beyond this line. We can elongate the chin or enhance its anterior projection with dermal fillers. Increasing the forward projection of the chin will also help tighten the skin around the jawline area. The lateral borders of the chin can also be enhanced, which would result in a squarer chin, as well as adding definition to the jawline.

Cheek enhancement with dermal fillers is very popular amongst the female clientele in aesthetics. For male patients, however, this is an area that can often go wrong, where too much volume is placed resulting in a more feminine look. The male cheeks are flatter but more angulated when compared to female cheeks.

Dr Ahmad designs bespoke male filler treatments based on two important aspects: restoration and enhancement. Restoration is a cosmetic intervention to improve a facial area or structure that has changed because of ageing and the aim is rejuvenation. On the other hand, enhancement is to improve a feature or an area to make the male face more attractive.

Q: Is the Treatment safe?

Q-Who is suitable for this treatment?

Everyone. However, it should be avoided in cases of skin infection, allergies and chronic disease affecting the muscles. It should also be avoided during pregnancy and lactation.

Q- Are there any side effects?

It can cause mild pain and tenderness on the lips. Rarely can cause the bruise at the site of injection.

Q-Who should have this treatment?

Any male who lacks muscular features like strong chin and prominent jaw can have this treatment.

Note:-More than one session may be required for a full-face treatment